"By now I'm almost pain-free and I'm not taking any more medication!" 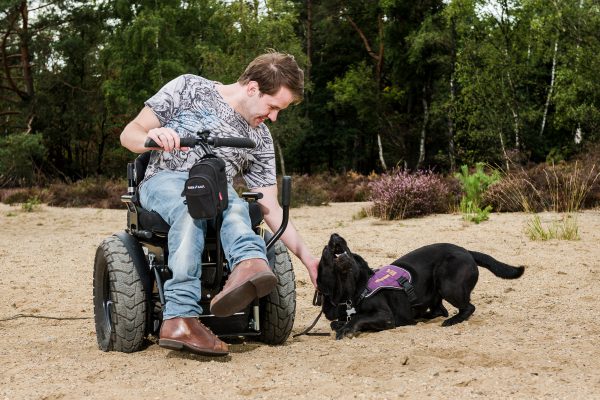 No-nonsense man Sjoerd van den Berg is not afraid of anything. With his hand-moved wheelchair he went everywhere, but he got shoulder problems. “My arms have been arms and legs at the same time for twenty years. I got a lot of pain, took heavy painkillers four times a day, which only took away ten percent of the pain.

I slept badly, became cranky, could do less because of the fatigue, and continued the day reasonably stoned. If I want to live a good life and still have shoulders in twenty years’ time, then I have to do something now,’ I thought.

Sjoerd had tried the Genny before. “Also a seated-Segway, a beautiful design device. I like to ride through rough terrain. However, certain parts of the seat were difficult to keep clean and this caused problems.

Last year I was alerted to the Freee and the Bi-Go. I tried both and chose the Bi-Go. This is the most non-nonsense version. It fits perfectly and its robust appearance was decisive. The chair is very mechanical, so no problems with a loose contact. If I move forward, the chair moves forward. The same goes for the movement to the back. I steer with my hands and stand still, so all I have to do is pull the lever to fold down the supports. Deliciously simple and after a walk in the woods I can just hose down the Bi-Go with my assistance dog Offra. Also riding over hilly terrain, like the other day in Luxembourg, it endures very well. Even a very steep street that I could never have taken with the hand moved wheelchair. So cool!”

Sjoerd has been riding his Bi-Go since this spring. The perfect solution for him, but the municipality thought otherwise. “The municipality wanted to stick strictly to their policy and the Bi-Go was not there for that. I had to settle for a heavy, cumbersome and clumsy electric wheelchair, which barely fitted in the bus and only drove ten kilometres per hour. If, after a month, the chair doesn’t give birth anyway, then I had to get in touch again. Crazy, especially when you’re talking about saving money! After six months we hadn’t made any progress yet and we switched on the tv show Kassa.

When we knocked on the door of the municipality with the camera, we got such a standard story, but the next day we got a call. We – my mother, the hostess without a camera and I – were invited for an interview with the alderman. In half an hour, the alderman also concluded that the Bi-Go was indeed a total solution, for the same or even lower price than the power wheelchair. I received a pgb, including an amount for maintenance. Three weeks later I had my Bi-Go. It has more than exceeded my expectations. By now I’m almost pain-free and I’m not taking any more medication!”

The Bi-Go Seated Segway gives you the feeling of ultimate freedom with a rugged look. A robust no-nonsense solution for people who choose their own path.

“Finally to the city, horse riding and friends by myself!”

“My freedom back, thanks to the Freee!”

“What a freedom. Not only for me, but also for my husband.”

“The Freee lives up to his name. He really gives you freedom!”

“Just about every ride a thumb up!”